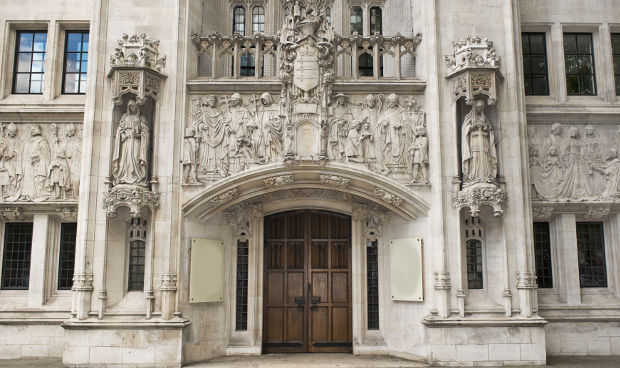 Almost two years ago, I wrote at length about vigilante gangs of “paedophile hunters” who pose as young children on social media and messaging apps, in an attempt to entice paedophiles into committing criminal offences by engaging in sexual communications and attempting to meet the “child” offline. One of the central questions of that post was whether the actions of such groups could be said to amount to “entrapment” in Scots law.

In that post, I noted that, at the time of writing, there were no reported cases in Scotland that dealt with the legal question of whether private citizens (as opposed to agents of the state, such as police officers) can lawfully do this. There is evidence of significant numbers of prosecutions (and convictions) being obtained via the use of evidence that would not necessarily exist without the intervention of such groups. If their actions were – and are – unlawful, then such evidence would likely not be available to COPFS.

Today, the UK Supreme Court has delivered its judgment in the case of Sutherland v HMA, which is a case that deals with the legality of certain methods employed by online paedophile-hunting groups.

The Supreme Court did not directly consider the question of entrapment (as it had not been a live issue in the case). What it has done is given an authoritative, unanimous statement that the right to private and family life – set out in article 8 of the European Convention on Human Rights – does not, in principle, prevent paedophile-hunting groups from gathering evidence in online sting operations. It also does not, in principle, prevent the state from using said evidence to prosecute the targets of such operations.

Paragraph 3 of the judgment sets out the brief factual circumstances giving rise to the case:

An adult member of a paedophile hunter group, acting as a decoy, created a fake profile on the Grindr dating application using a photograph of a boy aged about 13 years old as a lure to attract communications from persons with a sexual interest in children. The appellant entered into communication with the decoy, who stated in the course of exchanges first on Grindr and continued on the WhatsApp messaging platform that he was 13 years old. In the belief that the decoy was a child, the appellant sent him a picture of his erect penis. The appellant also sent him messages to arrange a meeting. When the appellant arrived for the meeting, he was confronted by members of the decoy’s paedophile hunter group who remained with him until the police arrived.

Evidence of the messages was passed to the police, and the appellant was charged with various sexual offences:

The appellant objected to the use of the evidence provided to the police by the paedophile hunter group, but his objection was unsuccessful. Following his conviction after trial, his appeal to the High Court of Justiciary was refused, but permission was granted to appeal to the Supreme Court in respect of two questions relating to the operation of article 8 of the ECHR. 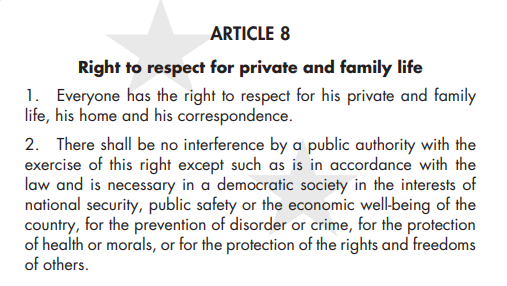 Section 6(1) of the Human Rights Act 1998 reads: “It is unlawful for a public authority to act in a way which is incompatible with a Convention right.”

The Supreme Court held that the appellant’s rights under article 8 were not interfered with, either by the actions of the paedophile-hunter group, or by COPFS in prosecuting him using the contentious evidence.

Lord Sales, giving the judgment of the court, makes clear the court’s general disdain for alleged paedophiles who might seek to make article 8 arguments in future:

“…[F]eatures of his private life and his correspondence for which protection is claimed under article 8(1) should be capable of respect within the scheme of values which the ECHR exists to protect and promote…[S]tates party to the ECHR have a special responsibility to protect children against sexual exploitation by adults.” [paragraphs 32 & 33]

After a discussion of various European cases that consider article 8, the Supreme Court concluded that the various statutory offences that the appellant had been convicted of must be, in the assessment of the Scottish Parliament (who enacted them), “a necessary element in the fabric of protection afforded to children”. As such, “[I]t is an aspect of the positive obligation of the state under article 8 to ensure that there can be effective enforcement of the law as contained in these provisions”. [both paragraph 39]

In the context of protecting children from abuse by adults, the Supreme Court unanimously concluded that the state’s obligation to protect children’s article 8 rights “outweighed any legitimate interest the appellant could have under article 8(1) to protection for his actions”. [paragraph 43] In other words, there were competing rights in this case, and the aims pursued by paedophile-hunters and COPFS far outweigh any right to privacy that the hunted may claim. The claimed right to privacy in this case was based on an illegitimate premise.

In short, where it is claimed that one’s article 8 right to privacy has been violated, it is usually an important to establish that there was a “reasonable expectation of privacy” in the first place.

For example, if the tabloid press were to publish topless photos of a celebrity, who then claimed that their article 8 rights were infringed as a result, the context would likely be very important. If said celebrity were sunbathing in their private and shielded back garden, and the images were taken via a drone piloted over the walls by a member of the paparazzi, then it could be strongly argued that the celebrity had a reasonable expectation of privacy within their own garden. If, however, the photos were taken as part of a “Page 3”-style photoshoot, then it would be difficult to argue that there could be any reasonable expectation of privacy.

In Sutherland v HMA, the Supreme Court held that online communications between the appellant and the “decoy” posing as a 13 year old did not attract a reasonable expectation of privacy on the part of the appellant, despite the fact that the messages were “private”, in the sense that they were not posts on a public forum or chatroom.

“[T]he appellant’s communications were sent directly to the decoy, a private individual believed by the appellant to be a child of 13. Their contents were not a matter in relation to which the recipient could be thought to owe the appellant any obligation of confidentiality. There was no prior relationship between the appellant and the recipient from which an expectation of privacy might be said to arise between them (contrast the position in Ribalda v Spain, in which the applicants had a reasonable expectation that they would not be subjected to covert video surveillance by their employer; and contrast the position which might arise in relation to intimate letters sent in the course of an established romantic relationship between adults). The appellant’s contact with the decoy came out of the blue and exhortations by the appellant in messages sent to the decoy that he should keep their communications private did not establish a relationship of confidentiality. Furthermore, the appellant believed that he was communicating with a 13-year-old, a child of an age in relation to whom it was foreseeable that he might well share any worrying communications he received with an adult.” [paragraph 56]

So, article 8 does not provide much protection to those who would commit criminal offences by communicating with children (whether real or decoy) online. The Supreme Court has concluded that the appellant’s article 8(1) rights to privacy were not interfered with in the first place, so the appeal effectively fell at the first hurdle.

Even if the appellant’s article 8(1) rights had been interfered with, article 8(2) requires the state to “operate an effective criminal law regime to deter and punish persons who threaten to harm young children…[Therefore] there is no doubt that the use by [COPFS] of the evidence provided by the decoy for the purposes of the prosecution of the appellant under that regime involved no breach of any positive obligation owed to the appellant.” [paragraph 67]

So where does this leave your Wolf Packs, Groom Resisters et al? The Supreme Court’s decision is far more nuanced than “the ends justify the means, lads”, but that’s not a bad principle to take away from the Sutherland case, for the time being. It’s hard to have much sympathy for those who would attempt to groom children for the purpose of abuse; the Court’s judgment certainly provides no ammunition for those who would claim that human rights only exist to “protect paedos” [sic].

However, questions remain. In the absence of a full discussion of entrapment as it relates to non-state agents, and of whether paedophile hunters ought to have prior authorisation as “covert human intelligence sources” under the Regulation of Investigatory Powers (Scotland) Act 2000, we cannot draw too many conclusions about the future viability of COPFS relying on evidence obtained by vigilante paedophile-hunter groups. For now, though, it would appear that COPFS will continue reaping the rewards (and risks) that I have previously written about in respect of these groups.

For the time being, the Sutherland judgment (and its reporting in the press) will inevitably boost the enthusiasm of such groups. On the basis that online paedophiles have no legitimate right to privacy when attempting to groom children, the hunters certainly have not been outlawed yet.

5 thoughts on “Paedophile Hunters and Privacy: Sutherland v HMA in the Supreme Court”