The basic definition of assault is an attack on the person of another, with evil intent to either cause injury or fear of injury.

It sounds quite dramatic, agreed. Punching, kicking, unwanted touching, striking with a weapon, pushing, shoving, stabbing, shooting and spitting (etc) can all be assaults, depending on context.

One thing that cannot be an assault is the use of words alone. There is no such thing as “verbal assault” in Scots law (though words alone may constitute other crimes, like (e.g.) a section 38 or racially aggravated conduct.

Although injury often occurs as the result of an assault, injury is not necessary for the crime to have been committed in the first place. There are degrees of aggravated assaults that take harm caused into account. In a rough reverse order of seriousness, they are:

You can assault someone without touching them.  Gestures that cause fear of injury (e.g. brandishing a weapon at someone) can constitute assault.

The offence of assault and robbery (in other words, carrying out a “mugging”) is when an assault (often by threats causing fear of injury alone) is aggravated by a connected theft.

Swinging a punch at someone, but missing, is an attempted assault.

You can assault someone indirectly, e.g. by setting your dog on them.

One of the most important things to know when considering whether something is an assault or not is this:

“assault cannot be committed accidentally or recklessly or negligently”

In other words, you cannot assault someone accidentally (e.g. by unintentionally bumping into them and causing them to fall down a flight of stairs).

Specific examples of how the law of assault operates

Certain classes of people are generally accepted as having the right to use physical force to contain people and situations, on the basis that they are not acting with evil intention. Police officers are the most obvious example. That said, they are not immune from prosecution for assault, if their actions exceed what is proportionate in the circumstances. Sheriff Miller’s reasoning in the case of PF Glasgow v Paul Fanning are quite helpful in putting this into a real-world context.

Medical professionals are another class of people who are generally protected from claims of assault, on the basis of a lack of evil intent. That said, if a rogue surgeon started performing unnecessary operations for malicious reasons, this would likely be assault. I am not aware of any high-profile Scottish examples (fortunately), but there is the recent case of Ian Paterson in England that illustrates the principle.

At the time of writing, parents and guardians of children are still allowed to hit their children in the interests of what is known as “reasonable chastisement”, or “justifiable assault”. This is not an unlimited right, though. The factors to be taken into account are set out in section 51 of the Criminal Justice (Scotland) Act 2003. In short, any physical chastisement has to be extremely limited. No shaking, blows to the head or use of implements. 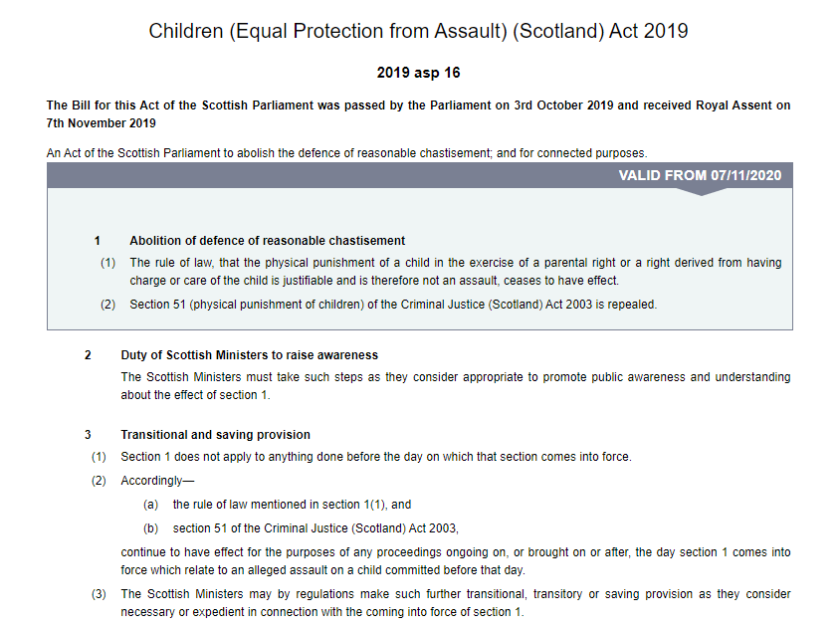 You can see from the above that, contrary to the (understandable) impression given in press reports, the “reasonable chastisement” defence is available in Scotland until 6th November 2020. Thereafter, s1 of the 2019 Act comes into force, and smacking children becomes an assault. Interestingly, s2 (the duty on the Government to “promote public awareness” of the smacking ban) is already in force. In other words, there is potentially a full year of public information campaigns (coronavirus notwithstanding) to inform people before the key part of the 2019 Act comes into force, so that there can be no excuses on the part of parents thereafter.

“Attacks” that occur within the bounds of sporting events are not assaults, due to the (presumed) lack of criminal intent. How else could boxing / MMA / Scottish football be allowed to carry on? Even “off the ball” incidents are rarely prosecuted, as they are generally just accepted (rightly or wrongly) to be “part of the game”, and best dealt with by sanction by the sport’s governing body. That said, there have been occasions when assault convictions have resulted from on-field incidents:

(not even a booking, somehow, but three months imprisonment for assault)

More recently, here’s an example of another headbutt resulting in an assault conviction.

As a matter of law, it comes down to what the victim can reasonably be regarded as having accepted by their participation. A stray elbow when going up for a header is an occupational hazard of being a footballer, and a stray boot in a ruck is an occupational hazard of being a rugby player. If conduct goes beyond that, then it may well be an assault, on the basis that the attack could not reasonably be an attempt to play the game.

You cannot consent to an assault.

In Smart, the court drew a distinction between the organised and regulated nature of a boxing match, and the impromptu “square go” in the street. As a matter of public policy, that is probably fair enough (it not being in the public interest to have “legal” fights in pubs and streets across the country every Saturday night).

The context of consensual sexual relationships presents some difficulty. It’s probably fair to say that a significant proportion of the population have, at least, a passing interest  in either the giving or receiving of pain for the purpose of sexual pleasure (how else do you explain the success of Fifty Shades of Grey?). If you cannot consent to being assaulted, are criminal acts being committed in makeshift Red Rooms Of Pain every night across the country?

In 2007, as part of the process towards the eventual Sexual Offences (Scotland) Act 2009 the Scottish Law Commission (the body tasked with reviewing and making recommendations to improve Scots law) recommended the following:

…but that recommendation was not followed by the Scottish Government.

At the moment, I am not aware of much in the way of case law to assist with this question. To be fair, I doubt the “consenting victims” are likely to want to get the police involved in the first place. I also doubt that the police/COPFS are, in the 21st Century, likely to take the the view that criminal proceedings in such circumstances are in the public interest.

When there is a case that answers the question definitively, I’m sure it will be high-profile. Until then, the case of McDonald v HMA is probably as close as it gets. Don’t read it while you’re eating.

My Tweets
Join 119 other subscribers