In accordance with s3(6) of the Criminal Procedure (Scotland) Act 1995, rape can only be prosecuted on indictment in the High Court. The maximum penalty is life imprisonment.

As of 14th July 2009, rape is a statutory offence in Scotland. It is defined in s1 of the Sexual Offences (Scotland) Act 2009 as follows:

“the general rule is that the actus reus of rape is constituted by the man having sexual intercourse with the woman without her consent; in the case of females who are under the age of 12 or who for any other reason are incapable of giving such consent, the absence of consent should, as at present, be presumed; and mens rea on the part of the man is present where he knows that the woman is not consenting or at any rate is reckless as to whether she is consenting…”reckless” should be understood in the subjective sense…”

The Lord Justice General at paragraphs 44-45

This page will focus on the crime of rape as constituted in the 2009 Act.

Most of the circumstances in s13(2) are self-explanatory. s13(2)(a) means that consent cannot be given when the complainer is incapacitated through drink or drugs. “deception… as to the nature or purpose of the conduct” in s13(2)(d) might be A deceiving B that penetration is as part of a legitimate medical procedure.

s14 provides that an unconscious person (whether asleep or otherwise) cannot consent:

This point was explored in more detail in the following recent case:

s15 provides for the scope of consent, and for the effect of its withdrawal:

s15 in particular emphasises that ensuring consent is an ongoing obligation (e.g. consent to a kiss, or oral sex, does not mean that consent to vaginal intercourse should be assumed). It also emphasises that a withdrawal of consent during penetration must be immediately acted upon.

A “mentally disordered person” is deemed to be incapable of consenting to sexual acts. This is covered by s17:

The absence of reasonable belief in consent is an essential part of the crime of rape, and must be proven by the Crown. Section 16 of the 2009 Act reads as follows:

“[T]he absence of a belief, of some description, has always been a requirement, at least in the sense that the accused has to have the requisite criminal intent. That is an essential part of many crimes, but it does not, as such, require separate formal proof. It is an inference drawn from facts (such as the use of force) themselves proved by corroborated evidence.” [Lord Justice-General Carloway at paragraph 23]

Consent (or reasonable belief in consent) is classed alongside special defences such as self defence or alibi, in the sense that advance notice of it must be intimated to the Crown.

A standard formation for the notice might be: “[accused’s name] pleads not guilty to the charge on the indictment and, specially and without prejudice to said plea, states that the sexual activity referred to in the charge, took place with the consent of [complainer] and with the accused’s reasonable belief that she so consented.”

It is widely-understood that, in general, proving charges of rape is relatively difficult, due to the fact that most allegations of rape arise from “behind closed doors”. This applies to most sexual offences.

As indicated above, the Crown must prove, by corroborated evidence:

There are a vast number of reported cases that deal with what can and cannot corroborate B’s account of events. Without wishing to set them all out in detail, the following are examples of “adminicles [articles] of evidence” that might be available, in any given case, to enable the Crown to present the case to the jury (as opposed to the accused being acquitted on a “no case to answer” submission due to insufficient evidence):

In the case of rape, the alternatives are as follows: 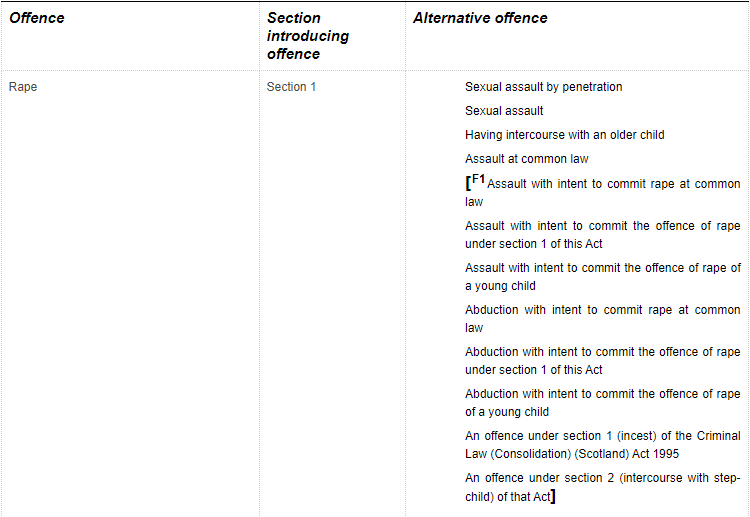