A fine is a financial penalty.

Statutory offences tend to specify maximum fines available to the court on conviction, often with reference to the standard scale:

When a statutory offence is only triable on indictment, the maximum potential fine is unlimited.

Where a statutory offence can be tried on indictment or on summary complaint, and the accused is convicted of it on summary complaint, the maximum fine tends to be the “prescribed sum” (currently £10,000). Where the fine is imposed in respect of a specified quantity or number of things, the maximum is the prescribed sum (£10,000) per quantity/number. Where a fine is imposed in respect of each period of a specified length during which a continuing offence is commited, the maximum fine is not to exceed £100 per period.

When new criminal offences are created, or sentences increased by Parliament, the press tends to get very excited about reporting maximum potential fines. This ignores the reality that most fines in the Sheriff Court are in the hundreds, rather than thousands, of pounds. It is a sad fact that most people being sentenced for criminal offences are of extremely modest means.

When an accused person is convicted of an offence, and the court is considering the imposition of a fine, it will want to know (from the accused themselves or their defence agent) about their “means”. This involves a brief summary of the accused’s main income (e.g. their annual or monthly income from employment) and expenditure (e.g. monthly rent bill). This is because s211(7) of the 1995 Act requires the court to “take into consideration, amongst other things, the means of the offender”.

In summary proceedings, the court has the power (albeit hardly ever used) to order the offender to be searched, and any money found on them (if satisfied that it does not belong to someone else, or “that the loss of the money will be more injurious to his family than his imprisonment or detention”) applied towards payment of a fine.

As of 25th November 2019, Scotland has followed England and Wales by providing for a “victim surcharge” to be added to financial penalties. They are governed by s253F-253J of the 1995 Act and The Victim Surcharge (Scotland) Regulations 2019. The goal is to help fund “support services for persons who are or appear to be the victims of crime”, by establishing a pot of money funded by an additional levy on those convicted of crimes and sentenced to a financial penalty.

There is a straightforward formula to apply in order to work out the amount of the surcharge, as set out in the Regulations:

Any reference below to “outstanding fine” is to be read as including the surcharge amount.

Most people being fined in court are not in a position to pay their fine in a single instalment. In practice, then, the imposition of a fine in court is immediately followed by the question of “time to pay”. This tends to mean the payment of the fine amount in instalments.

There is no strict rule as to how large/small the instalments should be; what the court will allow will depend on the individual’s means, and the overall fine amount to be paid.

In practice as a solicitor, I have offered instalments of £200 a month, £5 a week, £2.50 a week and everything in between, on behalf of clients. Ultimately, it is a matter for the court to set the instalments.

The Sheriff Appeal Court case of Foster v PF Edinburgh [2019 SAC (Crim) 16] (particularly paragraphs 23 and 24) is a useful read on the topic of instalments. In this case, the court suggested that when setting fines and instalments, “achieving payment within…12 to 18 months…will generally provide a useful and realistic check of the level of fine to be imposed. Such a check does not have the status of a rule but it is nonetheless an approach which may assist sentencers.”

An accused person can apply to the court for further time to pay a fine, which the court will allow “unless it is satisfied that the failure of the offender to make payment has been wilful or that the offender has no reasonable prospect of being able to pay if further time is allowed”.

Fines are collected by the Scottish Court Service. They are payable online, by post, by phone or in person at any Sheriff Court in Scotland.

When a court imposes a fine and allows time to pay, it will generally impose a Fines Enforcement Order at the same time.

A Fines Enforcement Order looks like this. It specifies the penalty and how it is to be paid (e.g. what the instalments will be).

s226A of the 1995 Act introduces Fines Enforcement Officers (FEOs). Their job is “providing information and advice to offenders as regards payment of relevant penalties”, and “securing compliance of offenders with enforcement orders”.

FEOs have powers under s226A-226G of the 1995 Act to do certain things in order to secure fine payment. They can:

“No Time to Pay” and Imprisonment as an Alternative

The court has the right to not allow time to pay a fine, in certain circumstances:

“sufficient means” in (2)(a) might refer to a convicted person who attends court in a jacket made out of £50 notes, or where quantities of their money have been seized by the police at the time of arrest. In those cases, the convicted person must pay immediately or be in default.

In most cases, an order of “no time to pay” immediately results in a period of imprisonment, since most accused people do not attend court in jackets made out of £50 notes.

The maximum terms of imprisonment for adults for non-payment of fines are found in s219 of the 1995 Act, and are as follows: 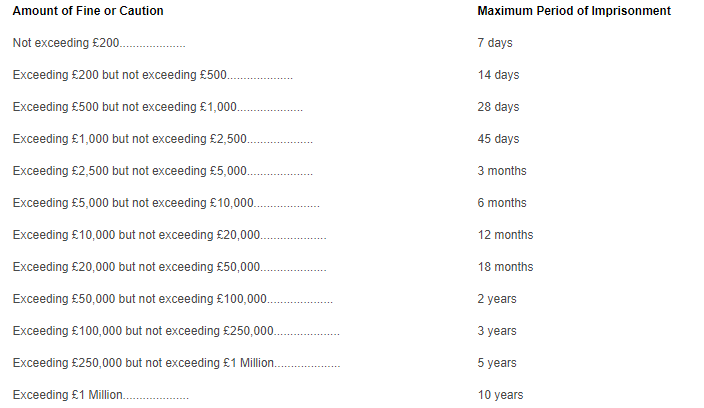 In the rare case of a child (someone under 16 years old) defaulting on a fine, the maximum is one month’s detention “in a place chosen by the local authority”.

Where some of a fine has been paid and the remainder defaulted upon, the table above should be read as “Amount of fine…still outstanding”

If part or all of a fine is outstanding after a deadline for payment has passed, and the convicted person is not in prison, s216(1) of the 1995 Act  does not allow the court to immediately impose imprisonment as an alternative to. Instead, it requires the court to enquire, in the convicted person’s presence, why the fine has not been paid. This tends to come about when a FEO has referred an unpaid fine back to the court.

The court has the choice to either send a citation to the convicted person, or issue a warrant for their arrest.

Often, a Means Enquiry court will hear the convicted person’s reasons for not paying the fine, and allow them further time to pay. It can also vary the instalments for payment, or remit (cancel) part or all of the outstanding fine.

The court also has the power to sentence the convicted person to imprisonment as an alternative to payment. In doing so, it would revoke the FEO mentioned above.

If a CPO is imposed as a result of default on a fine, and the convicted person then pays the outstanding amount, the CPO must be discharged.

If a CPO is imposed as a result of default on a fine, and the convicted person then breaches the CPO, the court can revoke the order and impose imprisonment for a period not exceeding three months, or it can vary the number of hours specified in the work requirement.

My Tweets
Join 119 other subscribers