s4-6 of the Sexual Offences (Scotland) Act 2009 create three separate offences, all to do with the idea of A causing B to become part of, or aware of, sexual activity or images without B’s consent (or any reasonable belief that B consents).

The offence does not require there to be any particular purpose for the coercion (e.g. for A’s sexual gratification), provided that A’s actions are intentional.

s5: Coercing a person into being present during a sexual activity

It’s hard to describe this offence without citing the example of allegations made against Louis C.K.

This is an offence of A causing B to be present while A (or a third party) engages in sexual activity, without B’s consent or any reasonable belief in B’s consent, for either (or both of) A’s sexual gratification or B’s humiliation, alarm or distress.

s6: Coercing a person into looking at a sexual image

This is an offence of A causing B to look at a sexual image (whether a still image or a film) without B’s consent or any reasonable belief in B’s consent, for the purpose of A’s sexual gratification and/or the humiliation, alarm or distress of B.

“causing another person…to look” could mean (for example) sending an offending picture message, or putting a pornographic film on a TV in B’s presence.

“Consent” and “Reasonable belief” have the same meaning as they do with the offence of rape.

s60 of the 2009 Act defines an act as sexual “if a reasonable person would, in all the circumstances of the case, consider it to be sexual.”

In the case of s4-6 offences, the alternatives are as follows: 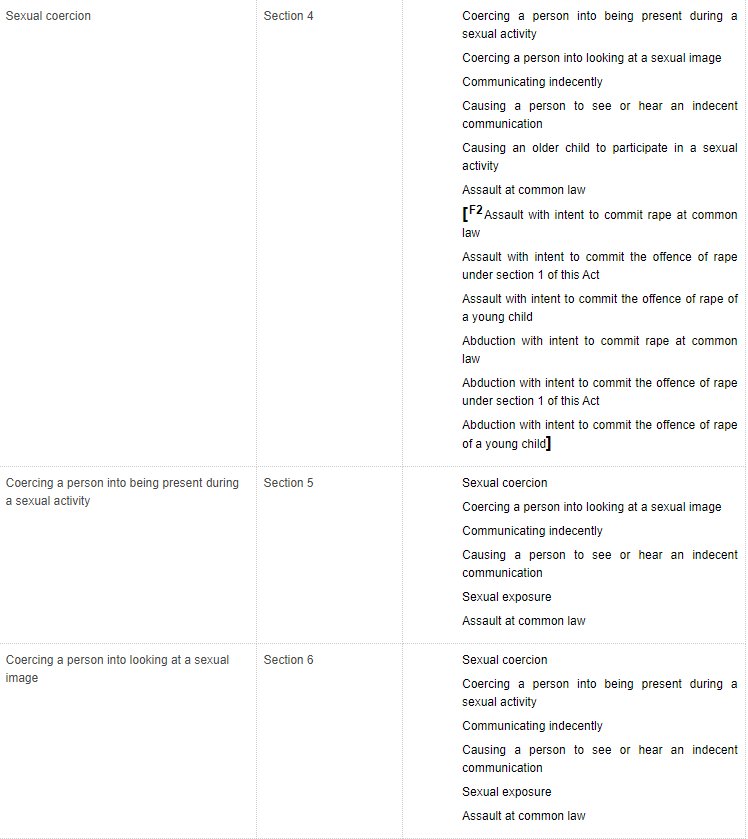