Murder is any wilful act causing the destruction of life, whether wickedly intended to kill, or displaying such wicked recklessness as to imply a disposition depraved enough to be regardless of consequences.

Murder has to be tried in the High Court of Justiciary. If you are convicted of murder, you will receive a mandatory life sentence.

Actus Reus – “A wilful act causing the destruction of life”

Both murder and culpable homicide are “result” crimes. The obvious starting point in both cases is that somebody has died.

You cannot be convicted of murder if your victim lives. If your actions cause them to become brain-dead, you could be liable for their murder/culpable homicide if their life-support is switched off (see the section on the legal concept of causation for how this works).

Ordinarily, the death of the victim will not be controversial. That said, it is possible to prove murder even if the body of the victim cannot be found (provided that there is enough circumstantial evidence to show that the accused killed the victim with the requisite mens rea, then – presumably – took steps to dispose of their body). For a recent example of this, take a look at the conviction of David Gilroy for the murder of Suzanne Pilley, which was upheld on appeal.

“Wilful acts” bring to mind the sort of things that might constitute assault or culpable and reckless conduct. For example, stabbing someone could be an assault, or it could be murder, depending on the consequences for the victim (and the accused’s mindset).

The requisite mindset for murder has to be inferred from the facts and circumstances of the case.

A wicked intention to kill could come from the accused’s actions prior to the actus reus. There might be evidence, for example, that the accused had told friends that they were going to kill the eventual deceased, due to an ongoing dispute. In these circumstances, the Crown might libel that the accused “did evince malice and ill-will towards [the deceased]” as part of a charge of murder. Going out to meet someone armed with a lethal weapon might also show that the accused intended to kill them.

The above, essentially, covers the idea of motive. That said, you do not need to prove motive or premeditation to convict someone of murder. That’s where “wicked recklessness” comes in.

Wicked recklessness is to be distinguished from “ordinary” recklessness. The definition is summarised in the case of Scott v HMA:

An act that displays wicked recklessness will inevitably be a serious one, and the perpetrator will show a complete disregard as to whether their victim(s) live or die as a result.

Wicked recklessness is an objective standard, to be inferred from the facts and circumstances of the case. Assuming that there is insufficient evidence of wicked intent to kill, a single stab with a knife is less likely to be a wickedly reckless attack than repeatedly stabbing someone in a frenzy.

For a (potential) example of wicked recklessness, take the 2013 convictions of Scott Snowden and Robert Jennings for the murder of three members of the Sharkey family, by setting fire to their home. It appears that the accused may well have had no intention of killing the 21 year old son and 8 year old daughter of the family, but they were convicted of their murder due to the wicked recklessness of their actions. 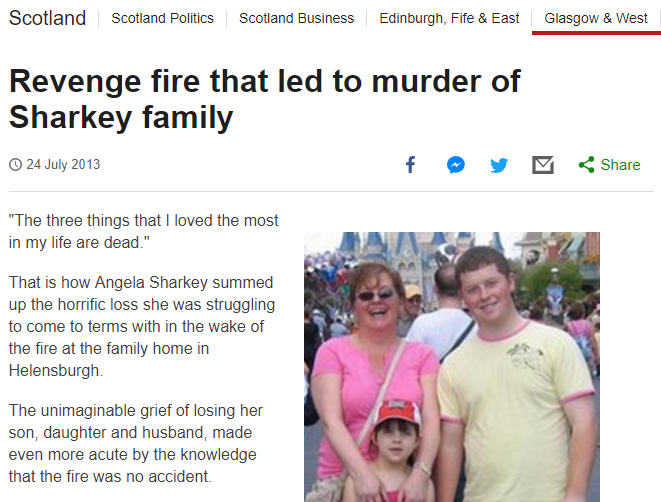 Culpable Homicide is an alternative verdict available to the jury in murder cases.