The law is a big field in which to work, and we (solicitors) all have our reasons for finding our particular niches.

Some are drawn to the riches of “Magic Circle” firms in London, where long hours of tedious work pays newly-qualified lawyers the best part of £100,000 a year, which they presumably regard as a fair trade for their youth and optimism. Others want to fight injustice in the forums of immigration, asylum and employment tribunals, or help resolve bitter family disputes in a way that protects the interests of innocent children.

Obviously, it’s a disgusting crime, which would no doubt be extremely distressing for the victim. The Daily Record reporter’s feelings are clear, insofar as he has used the phrase “revolting pervert” on more than one occasion. He appears to have let tabloid standards slip, though, in that nobody gets slammed or rapped in the course of the article, which is a shame.

There are a few legal points that are worth making, in the context of this story.

Mr Reid (the “revolting pervert” in question) appears to have been charged with the specific statutory offence of Sexual Assault by intentionally or recklessly ejaculating semen onto someone without their consent (and without reasonable belief that they were consenting). This is found at section 3(2)(d) of the Sexual Offences (Scotland) Act 2009. 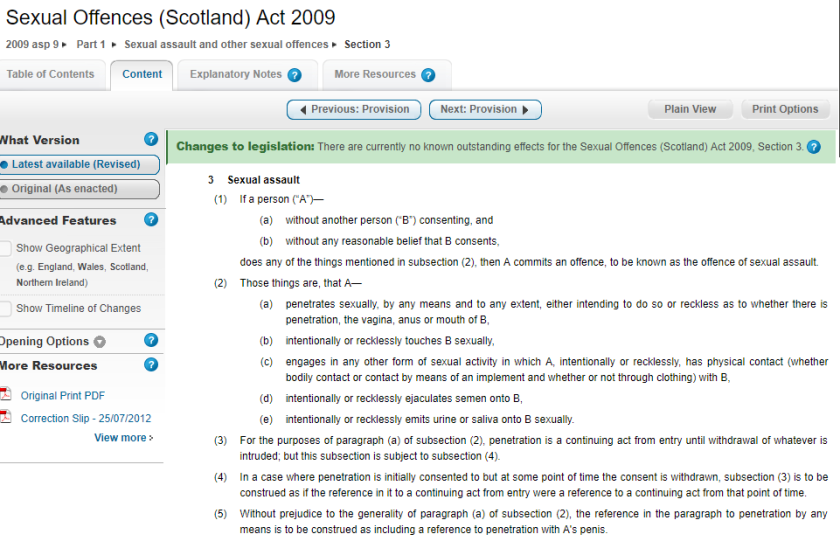 Not sure whether I’m relieved or disturbed that there’s a specific offence for this sort of thing. I’ll try to cover it in more detail when I get round to doing the section on sexual offences.

If you’ve read the story above, you’ll have noticed that Mr Reid was not, in fact, convicted of the offence he was charged with. He was convicted of assault, as opposed to the specific statutory offence of sexual assault.

This might seem confusing if you aren’t familiar with criminal law. How can it be fair to be – effectively – acquitted of the crime you’ve been charged with, but convicted of a different one?

The starting point is subsection (b) of paragraph 14 of Schedule 3 of the Criminal Procedure (Scotland) Act 1995 (bear with me):

In other words, if you’re charged with a statutory offence, common law offences (e.g. assault / theft / reset / culpable homicide / breach of the peace etc) are always there in the background, and – depending on how the evidence comes out at trial – can be substituted in by the Sheriff or by the jury. Presumably, this is to lessen the chance that people who have committed crimes are not able to escape by virtue of the fact that they’ve been charged with the wrong crime.

In this case, the Sheriff appears to have said in his judgment:

So, the evidence did not support the original charge under s3(2)(d) of the 2009 Act, in that there was insufficient evidence of Mr Reid ejaculating the semen onto the women (to put it bluntly). Presumably, though, the evidence suggested that he had thrown it at her in some way (possibly from a vial), which – provided there was evidence that this was a deliberate act – would be enough to constitute a common law assault, and convicted him accordingly.

Mr Reid was jailed for eight months, and made subject to the “notification requirements” of the Sexual Offences Act 2003 (also known as “being put on the Sex Offenders Register”) for a period of ten years. These requirements are worthy of a page of their own (which I will add to my long to-do list in respect of this site), but for now I will just briefly explain why Mr Reid was made subject to these requirements for a common law assault, given that he was not convicted of an offence under the Sexual Offences (Scotland) Act 2009.

Paragraphs 36 – 60 of Schedule 3 of the 2003 Act apply to Scotland, and set out which convictions will land you on the register. Have a look at paragraph 60:

That phrase “significant sexual aspect” is the key one. If the court decides that the facts and circumstances of the case suggest that you committed an offence for the purpose of sexual gratification, you could be made subject to the notification requirements. Theoretically, any offence could land you on the reigster in this way. For example, the protagonists of the 1996 film “Crash” – if the events took place in Scotland today – could be made subject to the notification requirements on the basis that there was a significant sexual element to their dangerous driving.

For another example, here’s a relatively recent and straightforward Appeal Court judgment  that follows from a Sheriff’s decision to put someone on the register as a result of some “grossly offensive or of an indecent or obscene or menacing character” jokes on Facebook, resulting in a conviction under section 127 of the Communications Act 2003.

In Mr Reid’s case, it’s hard to view the throwing of semen as having anything other than a significant sexual element.

Firstly, fair play to Sheriff McCormack for leaving us all hanging re. the other example of lamentably unbelievable defence evidence – one for the memoirs, no doubt.

I wasn’t there, and know no more about this case than what’s in the papers, but I have no doubt that Sheriff McCormack’s comments were aimed at Mr Reid, rather than whoever was representing him (if anyone).

US courtroom fiction propagates this daft notion of “this lawyer is amazing – he/she has never lost a case!” In the real world, if you’ve never “lost” a criminal trial, you probably haven’t run many. The lawyers I admire most will run completely hopeless trials, in the knowledge that their client will inevitably be convicted, because their client insisted on a trial.