One of the unfortunate realities of being a criminal defence lawyer is
that you become intimately acquainted with lots of people’s Objectively Bad sexual predilections. Obviously, you dream of getting a case like this:

More often than not, though, you’re dealing with charges that allege the depths of human depravity (with frustratingly little potential for good puns, unlike Bike Sex Guy – you can make some wheely good ones about him).

Arguably, the most difficult cases involve allegations of the sexual abuse of children; you see and hear some pretty dreadful things. Cases like that aren’t conducive to blog posts that both inform and entertain, so I’ll defer to Brass Eye’s Paedogeddon! episode from
2001, which is one of the funniest things I’ve ever seen (and I’ve seen an article about a guy trying to have sex with a bike, lads).

In the light of increasingly stretched police forces across the UK, and the constant narrative of SICK BEASTS CAGED for preying on children coming from the press, it’s probably not a great surprise that vigilante groups appear to have taken it upon themselves to proactively “hunt” paedophiles. Posing as children online, they try to bait people into arranging to meet with them for sexual purposes.

Thereafter…it’s slightly less structured. People tend to get quite excited when they believe they’ve successfully “outed” a paedophile.

Clearly, the most troubling thing about the above examples is the choice of the unbelievably naff name “Wolf Pack Hunters”. Sounds like a dating site for furries (speaking of Objectively Bad sexual predilections). Beyond that, what are the legal implications of private citizens setting up “stings” in order to gather evidence that may end up being relied upon in a criminal court?

“Detection by deception is as old as the constable in plain clothes.”

“Entrapment exists only where the crime was committed as a result of instigation or persuasion by the police or other authority, and committed by a person who would not otherwise have been engaging in the activity in question.”

Traditionally, the investigation of crime is for agents of the state – most commonly, the police. An extremely effective way to obtain evidence that somebody is guilty of a criminal offence is to have him/her commit that offence in the presence of a police officer.

Say that the police suspect that a particular flat is being used as a base for drug dealing. “Undercover” officers may go to the flat in disguise and attempt to make a “test purchase” of drugs, in order to satisfy themselves that drugs are indeed being sold by the occupier. The occupier could then be criminally liable on the basis of the undercover officers’ evidence.

Similarly, if the police suspect that an online chat room / instant messaging app is being used to “groom” children for sexual exploitation, officers may pose as children and gather evidence on communications made by unsuspecting chat participants. This may lead to the target actively taking steps to meet the “child”, which tends to end badly for them when they turn up at the pre-arranged location. 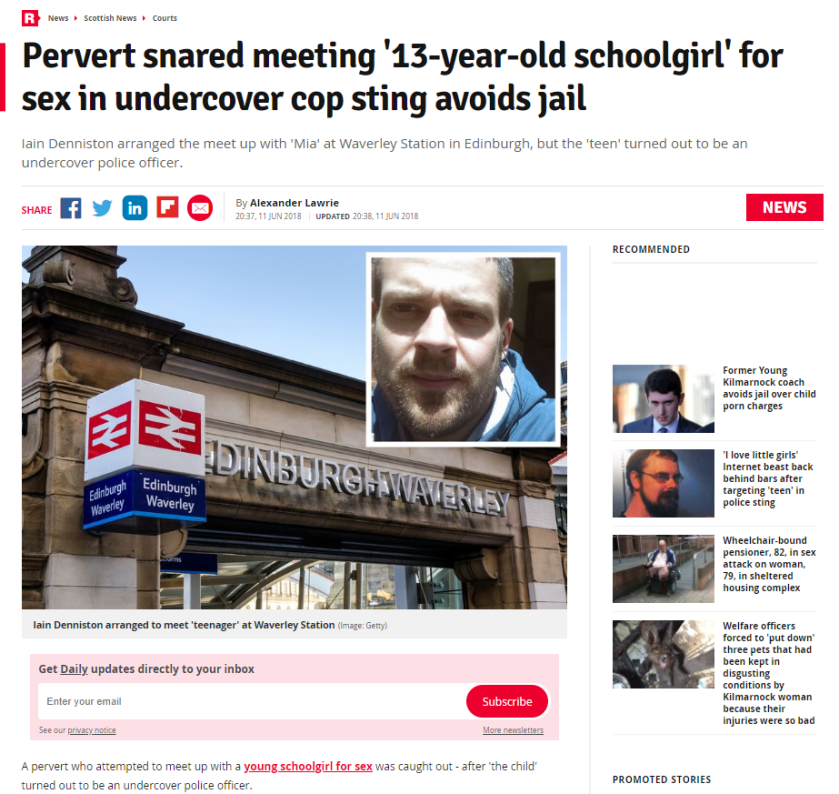 The above examples involve the deception of the target as to the police officers’ true identity and reasons for making contact. Fortunately for the state, Scots criminal law gives the police certain powers in this respect.

That said, if their actions cross over into entrapment (think of it as “state-created crime”), then this may well be fatal to the prosecution, on the basis that the police have acted “oppressively”. This should be raised by the defence as early as possible, in what is known as a “plea in bar of trial”.

Given the definition of entrapment from the authoritative “Renton and Brown on Criminal Procedure” above, we know that deceiving the suspect in the course of investigation does not necessarily amount to entrapment, and therefore is generally permissible in the investigation of crime by the police. This is borne out by various cases on the topic.

So, hopefully you have an idea of what the police are entitled to do when it comes to ensnaring would-be criminals. For an example of when this boundary is crossed, have a read of HMA v IP (2017 HCJAC 56), which is much briefer than the three cases I’ve listed above. It deals with a police operation to detect paedophiles online, so it’s relevant for present purposes too.

R v TL: Can Private Citizens Entrap Each Other?

So far, you’ll have noticed that I’ve been talking about entrapment as it relates to the police. The reason for this is that , traditionally, entrapment as a plea in bar of trial is based in the chin-stroking philosophy that, as the state is responsible for the investigation and prosecution of crime, it should not be allowed to rely on evidence that was sourced due to its own misuse of power. But what about when a private citizen uses deception in order to go fishing for sweet, sweet evidence?

There are no reported cases in Scotland (that I know of) that deal with “entrapment” by private citizens. We may see one or two in the relatively near future, thanks to the wacky antics of our pals in the Wolf Pack, but who knows?

That said, we can look to a very recent case from the English Court of Appeal – R v TL – that may provide some persuasive (albeit not binding) guidance on the matter. As with the Loosely case above, the Scottish courts are prepared to take English decisions on board when coming to their own view on matters.

For more detailed summaries of the TL case, see here and here.

So, good news if you fancy yourself as a vigilante in Scotland, right?

Well, maybe. To reiterate, R v TL is an English case, so it doesn’t necessarily have any bearing on Scottish cases in future. We’ll have to wait and see what happens if (and I think it’s only a matter of time) a case comes before the Scottish courts alleging entrapment on the part of untrained but enthusiastic amateurs.

In the meantime, we can be pretty sure that non-state agents investigating crimes (and not in a cool Miss Marple way) carries a unique set of risks. Let’s look at some.

Evidence gathered by vigilante groups can be – and is – passed on to the police and COPFS, who rely on it to secure convictions. Obviously, it is a good thing that those who would groom and abuse children are brought to justice.

However, there are clear reasons why prosecutors and police have gone on record to express their concern about citizens “taking the law into their own hands”.

One of the more obvious reasons is that “we were confronting a paedo, m’lord” isn’t a valid defence to charges of assault / breaching the peace / threatening or abusive behaviour / mobbing and rioting (etc). If you’re part of a group that goes to someone’s home address with the intention of intimidating and humiliating them publicly (no matter what they’ve done), in the knowledge that your actions will put innocent people (family, neighbours etc) at risk of harm, you can’t be surprised if you end up in the dock yourself.

That aside, while we know about the successful convictions, there appear to be plenty of cases in which the targeted person hasn’t even ended up being prosecuted, let alone convicted of anything.

115 people confronted, “at least 66” prosecutions. There may be more, but let’s go with that number. That potentially leaves 49 cases in which someone has been “confronted” by vigilantes, and then not prosecuted. Why?

It could be because the police/COPFS, upon reviewing the evidence received from these groups, have decided that they don’t want to take the risk of trying to rely on unfairly-obtained evidence. That potentially leads to acquittals, or – worse – authoritative Appeal Court judgments that tighten the reins on what the police/COPFS are allowed to do when passed evidence by these groups.

It could be because the vigilantes got the wrong person.

It could be because the targeted person, upon being confronted, decided that the best course of action would be to destroy their phone/computer in the window before the cops turn up to seize it, thus depriving the police/COPFS of crucial evidence. No evidence = no conviction.

The peedo hunters caught a guy and when they done their live feed on him they put a filter on it by accident 😂😂😂😂 a canny move pic.twitter.com/Cm1Fk9zivF

I don’t know whether the groups in question have considered the above risks. Maybe they have, and have taken the view that they don’t care about what the police or courts do – a conviction is a bonus, but not the goal. They may well take the view that live-streaming an angry mob confronting somebody in public is a better form of “justice” than any protective measure that a court could impose as part of a sentence.

All I’ll say is: Paedogeddon! was meant to be satire, not a documentary.

One thought on “Fantastic Beasts and Where to Find Them”

My Tweets
Join 111 other followers